This film is based on the true story of Mark O’Brien (John Hawkes), a 36 year old poet who has been paralysed from the neck down since the age of 6 and has never had any sexual experience – ever, and spends most of his life in an iron lung. With the support of his priest (William H. Macy) he decides to see a sex surrogate (Helen Hunt, in a truly committed performance).

It doesn’t sound particularly cheery and to tell the truth, I probably wouldn’t have gone to see it if it hadn’t been for my wife. I thought it was probably some biopic of a rock band I’d never heard of.

So let me tell you that the film was full of humour, hope and love, and is extremely frank with the subject matter. I was captivated for an hour and a half.

Excellently performed by all the cast, especially Helen Hunt, and unobstrusivley directed by Ben Lewin – the last film he did was 18 years ago  – ‘Paperback Romance’ – nope I’d not heard of it either – he definitely needs to be making more films.  In one scene, my wife almost broke my arm she grabbed it so hard:  It’s the middle of the night. Mark is lying in his iron lung. He’s alone, thinking. We’re listening to the sound of the equipment burbling away. The lights go out and the lung stops…

The film’s main source is Mark’s essay ‘On seeing a sex surrogate‘ written in 1990, and a short documentary called ‘Breathing Lessons: The Life and Work of Mark O’Brien’ won an Academy Award in 1997.

Ok, this is Arnie’s new film and for any of you asking – is this really a small indie movie? – I’m going to mention it  because:

1. I really liked the director’s other films that I’ve seen, especially his asian western ‘The Good, The Bad, and The Weird’ (which is really worth trying to get hold of – I can still remember the opening scene which starts high up in the sky and tracks a bird down towards, and into, a moving locomotive)

2. It is an Independent movie

3. It’s very enjoyable (in a fast food kind of way)

4. It seems to have been unfairly maligned

Often in this genre there are idiotic plot points and characters doing stupid things to drive the story forward or to justify an action sequence. Suprisingly I found characters doing fairly credible things (for a movie),  and the plotting was actually pretty intelligent and full of little surprises.

The basic premise: bad guy escapes from the FBI in Los Angeles,  drives off in a super fast car (that even the FBI helicopters can’t keep up with),  has his gang clear the route of FBI and SWAT teams – leaving only Arnie’s sherrif,  ‘Ray’, and his deputies to stop said bad guy at the border to Mexico.

The escape is very neat, and the action is all nicely staged (stunts seemed old school rather than CGI) though I would like to have seen more of the director’s trademark visual flair come through – it was definitely muted – I think this was probably due to the constraints of a US film production.

The film is peppered with gallows humour (though the odd Arnie one liner was a bit groan inducing), and it has a certain joie de vivre.

If you are an action fan or an Arnie fan, pre-Eraser,  there is much to enjoy here!

This is writer/director Martin McDonagh’s follow up to ‘In Bruges’ (which I quite enjoyed – hell I even visited Bruges this year only to find myself swamped by tourists – yeah I know I was also a tourist – stayed for about 2 hours before jumping on a train to the beautiful Gent). Anyway. This film very much goes for the chatty dialogue extreme violence combo of Tarantino – and although it doesn’t reach the heights of Tarantino at his best (it sometimes feels a bit contrived) it definitely has a good try.

Colin Farrell is Marty, a Hollywood screenwriter who has a great title for a movie: Seven Psychopaths. Unfortunately that is it. Great title followed by 99 blank pages. His mate Billy (Sam Rockwell) decides to help him out and, amongst other things, puts an ad in the local paper for psychopaths to come on over and tell Marty their story. Billy also has a sideline business with Hans (Christopher Walken) in which they steal pet dogs, and then return them to the grateful owner in exchange for the cash reward. Things go pear-shaped really quickly when they steal the Shih Tzu belonging to Charlie (Woody Harrelson), who is definitely of the psychopathic type – and local gangster – who will stop at nothing to get his dog back.

I’m not really doing the story much justice here as there is shitloads going on and any more info would be a spoiler – I’d avoid reading reviews – suffice it to say there are twists and turns, and given that Marty is a screenwriter, self referential discussions on gangster type movies: such as why women are so badly written in these types of films (like this film), stories within stories and films within films. There is so much that is enjoyable in this movie that it didn’t really matter that occasionally it kind of disappeared up its own arse. And with such a great cast including Gabourey Sidibe, Tom Waits, Zeljko Ivanek (who should have got more screen time – you’ll probably recognize him instantly as that bloke from…) and a really great section with Harry Dean Stanton, there are surprises and laugh out loud moments. Definitely check Seven Psychopaths out. 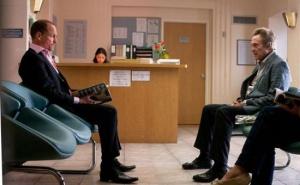 Oh yes. Don’t suddenly leap out of the cinema (or hit stop on your DVD etc) as soon as the credits roll. You don’t have to wait long for one ‘uh-oh’ hanging story thread to be tied up.

First of all I got a bollocking when I took my wife to this as I didn’t tell her it was a Mel Gibson film. She used to be a huge fan but now refuses to watch anything with him in it – which is, I guess, how much of America feels about him at the moment. Anyway, I wanted to see it because there were elements of the story that were of interest to me and I thought – once it starts – she’s less likely to drag me out.

This is a lowish budget film for Mel ($20m) and unusually for a film there weren’t loads of producer and company credits at the start of the picture, just his company, Icon.

Mel plays a guy who has stolen loads of cash from a gangster (who would like it back) and crosses into Mexico where he is locked up in a prison – which is more like a small town run by criminals. Here he finds friendship with a boy (Kevin Hernandez who is great) and uses his ill learned skills to survive.

I liked the film, it was entertaining and had some Tarantino type moments in it nicely put together by director Adrian Grunberg (Mel’s 1st AD on Apocalypto). What I found annoying was the voice over which explained the obvious and the night time camera work which produced a poor strobing video effect.

Other than that it had some clever sequences, and if you can ignore Mel Gibson’s personal life, is a movie worth checking out.

It has the appaling title of ‘Get the Gringo’ in the USA which would have only worked if it was a Tarantino or Rodriguez movie, who are a big influence on this.

Oh yes, I think my wife liked it too but I am going to have to let her choose the next ten movies for us to go and see.